Clare resident Ed Wentz doesn’t abide by the rules when it comes to art.

Upon retiring, Ed took up watercolor, honing his unique style, his individual technique. He woke up one day, he says, and he decided to break the rules. That’s where the fun and creativity came in.

“Everything has been painted today,” he says. “What an artist’s objective is now is taking the usual and making it unusual.” 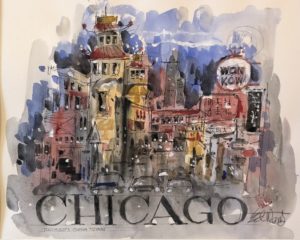 Ed will use a photo, for example, and create a vignette. He takes what he wants from it, removes what he doesn’t and adds his own flare. He plays around with colors and enjoys the freedom of his own interpretations. Sketches from his travels with his wife, Jane Ellen Murray, also serve as inspiration for his paintings.

“You’re creating something,” Ed says. “You’re not copying something. There’s a certain period of the painting where it becomes your own.”

His watercolors typically take three sittings to complete, he says. Each time he returns to paint, he has a fresh perspective.

To date, Ed has finished hundreds of paintings. And it all began with a career in advertising.

Over the years, Ed climbed the ranks at various agencies, working toward his goal of art direction and winning awards for his campaigns. With each ad he laid out, he used a marker that was similar to a chisel-edge watercolor brush, which led to his comfortability with watercolors.

“It was like going to your sandbox every day,” Ed says of his career.

His creativity then brought him back to the American Academy of Art on Michigan Avenue, where he took classes on scholarship in high school. He spent years teaching, helping artists tease out their strengths.

“What I would do is seek out the best part of what they do,” he says. “I develop their style, not mine.”

Eventually, Ed was named President of the Academy, and they put his very own artwork on display, too. That’s the point when he truly began to consider himself an artist.

With this recognition came further representation at different galleries. Ed served as Vice President of the Palette & Chisel Academy of Fine Art, where he and Jane Ellen both had many exhibitions. Perhaps most noteworthy, he was represented by the prestigious Kamp Galleries in the Drake Hotel. That, and the fact that people wanted his artwork for their own collections.

“To an artist, having somebody hang your work, and pay for it, to boot, is an honor,” he says. 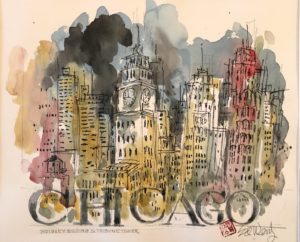 When it came time for Ed and Jane Ellen to consider continuing care and senior living, then, studio space was a must. Without their own studios, it’s easy to imagine that they would have given up painting, Ed says.

Instead, Ed and Jane Ellen have individual studios in their apartment at The Clare. Every morning, Ed goes into his studio to prepare his paints, just in case inspiration strikes. Ed also submits watercolors for display in seasonal exhibitions in The Clare’s community studio space.

“In a way, The Clare played a significant role in helping us continue our art,” he says. “It’s very much a part of me.”