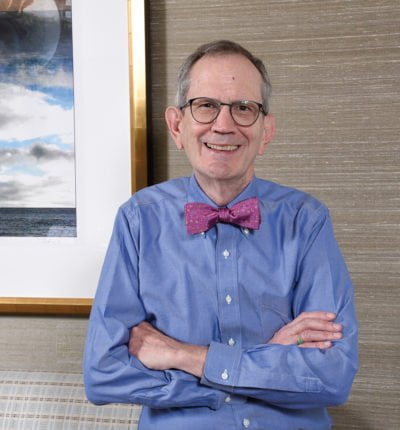 John Clum moved to The Clare a month ago and is already convinced that he and his husband made the right decision. “We were living in New York City and also had residences in Atlanta and London. Our first choice was New York City but there aren’t any CCRCs there. We don’t have family except for each other and we wanted to make sure that if we had any healthcare issues down the road we’d be taken care of.”

“My husband, Walter, is very involved with The Newberry Library and often traveled to Chicago. He learned about the Life Care Plan at The Clare during one of his trips.” John and his husband looked at other CCRCs and realized that The Clare was on a level far above anything else they had seen. “Nothing compared to The Clare, so when an apartment became available, we jumped at it.” They opted for a spacious one-bedroom apartment that faces southeast. “We love the views. The panoramas are very dramatic at night.”

Before moving to The Clare, John mentioned that he used to do a lot of cooking. Not anymore. “The food is fabulous, and like many residents say with a wink and a smile, the only thing I keep in my refrigerator now is wine.” In addition to the wonderful chef and wait staff, John finds the attentiveness of the entire staff at The Clare to be fantastic. “Everybody who works here is truly dedicated to what they’re doing. That’s an unusual quality to find in most places these days.”

Clum shared that he finds The Clare’s neighborhood a major draw. His lifetime involvement with the arts and The Clare’s culture-rich location dovetailed ideally with his work and interests. “It’s wonderful having the symphony, opera and Pritzker Pavilion so close.” Still active as a writer, director and lecturer, John is a Professor Emeritus of Theater Studies and English at Duke University and has twice won Duke’s Distinguished Teaching Award. He’s authored many books including Still Acting Gay: Male Homosexuality in Modern Drama, Something for the Boys: Musical Theater and Gay Culture and “He’s All Man”: Learning Masculinity, Gayness, and Love from American Movies. John has edited two major anthologies of contemporary drama, directed over 75 professional and university theatrical and operatic productions, and his own plays have been produced in theaters across America. He received his B.A., M.A. and PhD from Princeton University.

When asked if there was anything else he wanted to add about The Clare, Clum answered without hesitation, “The residents who live here are terrific. They’re an amazing group of people.”