As anyone who lives on Lake Michigan knows, its name is a misnomer: A variety of states and cities are represented on the rim of the glacial lake. Illinois, Indiana, and Wisconsin all claim well-known spots along the 1,400-mile shoreline.

While northern regions have large swaths dedicated as national forests, such as Hiawatha and Manistee, major cities dot the southern boundaries. Green Bay, Wisconsin, and Traverse City, Michigan, both reach into the northern portions, approaching the Canadian border.

For a complete portrait, here are the seven cities on Lake Michigan that everyone should know. 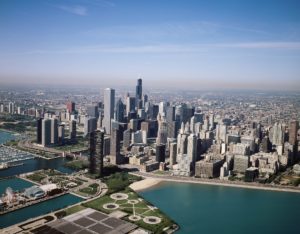 There’s not much that needs to be explained about Chicago (which also happens to be our home). It is one of the world’s leading cities, notable for the Willis Tower, historic Wrigley Field, the sprawling greens of Grant Park, and dozens of other features.

Chicago is located in the southwestern corner of Lake Michigan. With a population of 2.7 million, it tops all cities on Lake Michigan or, for that matter, any of the Great Lakes, including Toronto. (By population, Chicago trails only New York City and Los Angeles among all U.S. and Canadian cities.)

Waukegan is located about 45 miles north of Chicago on the western edge of Lake Michigan. Originally Riviere du Vieux Fort, or “Old Fort River,” English settlers changed its name to “Small Fort River” in the 1920s. Its modern name come from the Potawatomi word for “little fort,” wakaigin.

The county seat of Lake County, Waukegan is perhaps best known as the hometown of Ray Bradbury, author of Fahrenheit 451 and other science-fiction classics. Late comedian Jack Benny, a staple of radio and television throughout the mid-twentieth century, also claimed Waukegan as his hometown.

Gary, nearly an eastern suburb of Chicago, is located in northwest Indiana at the southernmost point on Lake Michigan. Nicknamed the “City in Motion,” a loss of industrial jobs has seen thousands of residents leave the city in recent decades—from almost 180,000 in 1960 to just 80,000 in the 2010s.

Gary still has its place in the history books, however, as the childhood home of The Jackson 5. A number of architectural relics, including Gary City Hall and the Lake County Superior Court House also convey the city’s historical prominence.

Traverse City, with a metropolitan population of just more than 143,000, is the northernmost city on our list, nestled in the Grand Traverse Bay in the northwest corner of Michigan. It is also the largest city in Northern Michigan, remarkable given its official population of less than 15,000.

Despite its small size, it attracts a half-million visitors annually and has won accolades as one of the top small U.S. cities. Traverse City, ironically, is also the only Michigan town on our list of cities on Lake Michigan. Most major Michigan cities are located inland (Lansing, Kalamazoo, and Grand Rapids) or on the opposite shore of Lake Erie (Detroit).

Green Bay has a tenuous relationship with its French founders. While a trading post established in 1634 allows it to claim to be one of the oldest European settlements in North America, the original name was something less memorable: La Baie des Puants, or “The Stinking Bay.”

Kenosha is situated in the southeast corner of Wisconsin, just above the Illinois state line and only a handful of miles from Waukegan, Illinois. Its location also provides ready access to Milwaukee, some 40 miles to the north, and Chicago, about 60 miles to the south. (The U.S. Census Bureau includes Kenosha in the Chicago Combined Statistical Area.)

European immigrant communities built much of the city and its economy in the early twentieth century, and that influence remains in architecture and the ethnic heritage of its residents. However, the once-powerful manufacturing sector has given way to a residential focus, with many Kenosha natives traveling north or south to the nearby metropolises for their daily commute. 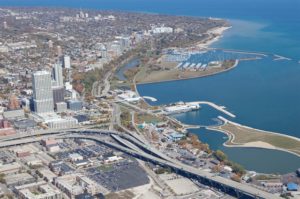 Milwaukee is the largest city in Wisconsin and the second-largest city on Lake Michigan behind Chicago. German immigrants established the city’s association with beer, retained in the name of its MLB team, the Milwaukee Brewers. The Miller Brewing Company is the most prominent of the city’s established brewers, even as other once-household beer brands have moved elsewhere or been purchased. (Schlitz, for example, was purchased by Pabst in 2014.)

Milwaukee is perched on the western edge of Lake Michigan and includes Racine and Waukesha in its metropolitan area.

While we’ve focused on cities on Lake Michigan, they’re not the only lakeside attractions, especially in the summer. Beaches and forests account for much of Lake Michigan’s shoreline. So, too, do dozens of quaint towns and small cities. For the millions of people living inland from the Atlantic or Pacific, Lake Michigan offers an ocean of possibilities.