Can you describe the municipal flag of your city? In most cities—even major metropolitan centers—the answer is “No.” After all, how often do you see a municipal flag outside of City Hall?

And yet even residents of other cities recognize the blue and white bars and red stars of the Chicago flag. It waves proudly in front of homes, adorns shop windows, appears on sports uniforms, and has been inked under the skin of thousands of devoted Chicagoans.

How the Chicago Flag Was Chosen 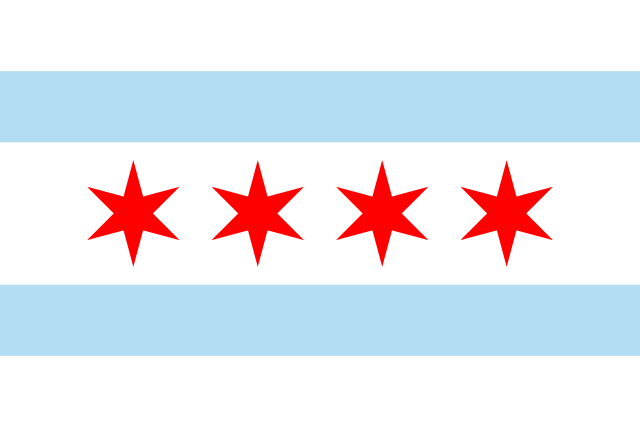 The making of the Chicago flag dates to 1915. That year, Mayor William Hale Thompson appointed a municipal flag commission to select a flag design.

The committee chose author, lecturer, and poet Wallace Rice to devise rules for an open competition to design the Chicago flag.

In a 1928 letter, Rice described some of the stipulations: “By the terms of the competition under the rules laid down by the Chicago Flag Commission in 1917, the use of religious symbols, which included the cross, the star and crescent, and the two triangles, one reversed and superimposed, was barred, for obvious reasons.”

The contest received more than 1,000 entries. However, the committee ultimately settled on a flag designed by Rice. Rice revealed the enduring appeal behind his design: “After more than four hundred designs had been made by me, I finally struck upon such a six-pointed star as had never appeared in any flag before, peculiarly and singularly a Chicago star, made by a Chicagoan for his greatly loved city, by an American in the tenth generation in this country, whose ancestors had fought against Great Britain, for the most American of American cities.”

“It differs from all other stars in use in European heraldry and in State and National flags and coats-of-arms,” Rice continued, “and is specifically for and of Chicago and nowhere else on earth.” The key difference in the design of the stars was their straight points at a 30 degree angle, rather than the customary 60 degree angle achieved by superimposing two triangles.

The Meaning of the Chicago Flag

The first iteration of the Chicago flag included two red stars. Each red star represented a key event in city history: the Great Chicago Fire on October 8–10, 1871, and the World’s Columbian Exposition of 1893. 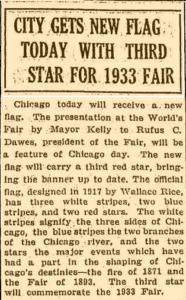 The Chicago City Council added a fourth star on December 21, 1939, to honor Fort Dearborn, built in 1803 in Chicago, destroyed in the War of 1812, rebuilt in 1816, and decommissioned in 1837. While it was the last star added to the flag, it appears first in the left–right orientation (followed by the stars for the Great Fire, World’s Columbian Exposition, and Century of Progress Exposition).

Each stripe has meaning as well, with the top and bottom white stripes representing the North and South sides of the city, respectively; the center white stripe the West side of Chicago; and the blue stripes the city’s critical bodies of water: Lake Michigan and the North Branch of the Chicago River for the upper stripe, and the South Branch of the Chicago River and the Great Canal for the bottom stripe.

Design Requirements for the Chicago Flag

The design requirements for the Chicago flag are set out in Municipal Code 1-8-030:

“The municipal flag shall be white, with two blue bars, each taking up a sixth of its space, and set a little less than one-sixth of the way from the top and bottom of the flag, respectively. There shall be four bright red stars with sharp points, six in number, set side by side, close together, next to the staff in the middle third of the surface of the flag.”

Vexillogists study flags. In 2004 the North American Vexillological Association conducted a survey to find the top municipal flags in the United States. The Chicago flag scored an impressive 9.03 out of 10 points, placing it second among all municipal flags. The victor? Washington DC. Chicagoans, of course, may disagree.