Early December marks 10 years since The Clare first opened its doors and welcomed its first residents, many of whom still live here today. This year is also the first time The Clare has ever reached 100% occupancy. 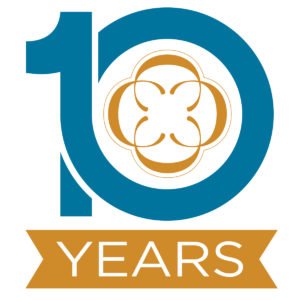 Looking back to where The Clare began paints the picture of just how far the community has come.

In 2002, the Franciscan Sisters of Chicago recognized the need and opportunity to build a one-of-a-kind retirement community in Chicago. They went on to design, own and operate the $253 million development that is now The Clare.

“In the industry, no one had ever seen anything like this – it was completely unheard of,” Executive Director Kyle Exline says. “The Franciscans, from my perspective, were the founders of the culture of The Clare. Their vision of what this place could be, how they wanted the staff to care for the residents, it still exists today.”

And that’s what drew many people to put down deposits.

“It’s like condo living with benefits, plus the guarantee that you’ll be taken care of when that time comes,” says resident Marilyn Day. Marilyn and her husband, Bob moved to The Clare in June 2009.

Construction delays meant The Clare didn’t welcome residents until late 2008, during the height of the recession and housing crisis. Over the next year, only about 25% of the units were occupied.

With so few residents in the building, the earliest residents easily learned about each other and became close. They navigated the waters of The Clare together.

“It was really one big, happy family,” says Carol Niebling, who moved to The Clare with her husband, Ralph in March 2009. “We all knew each other, we all got along and we all had common interests.”

Given the economic climate, the community never took off as planned. Several refinancings later, the Franciscan Sisters filed for bankruptcy.

As a result, The Clare went up for auction.

A Change in Ownership

Given its financial struggles, The Clare provoked a lot of fear among potential bidders.

“Even people in the senior living industry seemed very nervous about being interested in The Clare, because of how big and massive the failure was,” Kyle says.

Enter Senior Care Development, whose affiliate, Chicago Senior Care, purchased The Clare for $53.5 million in cash in June 2012 – a majorly discounted price, considering the cost of development – and also assumed resident contract liabilities. Life Care Services came on board to manage the community, when occupancy registered at about 35%.

The challenge, then, was to turn The Clare around. Without debt on the community, Senior Care Development slashed entrance fees, bringing pricing down to a competitive level with condo buildings and other residences in the area. The owners also appropriately staffed The Terraces, adjusted marketing and advertising and brought in new directors. That included Kyle as Executive Director in 2014.

Under Kyle’s leadership, The Clare’s mindset began to shift from pinching pennies to aiming to provide the best services possible. One such example is the $12-million renovation to the lobby and dining rooms in 2015.

Renovations involved transforming The Abbey from an all-purpose space to a high-end dining environment with panoramic views of Chicago. Expanding the 9th-floor Bistro from 20 seats to about 45 seats inside and 25 seats outside was another major project. An overhaul of The Lobby involved creating space for the mailroom and Concierge and establishing a high-end entryway.

“The physical changes are quite dramatic – they made a big difference,” says resident Barb Arsenault. She and her late husband were among the first to move to The Clare in December 2008.

Through it all, Senior Care Development continued to push The Clare forward.

“They never required us to take shortcuts or cut back on services,” Kyle says. “It was all about growth, and when you grow, you have to spend.”

In short, Senior Care Development always had faith in the community’s potential.

“The location, the people that we met and the building itself were all remarkable launch pads for executing the strategies to become a premier community in the country,” says Denise deFiebre, Senior Vice President of Acquisitions with Senior Care Development.

The Clare did indeed grow over the years. Even before the dramatic renovations were complete, The Clare had climbed to around 70% occupancy across the building in August 2015 and 60% occupancy in Independent Living, according to Senior Housing News.

“If you go back to when the Franciscan’s thought of this concept in 2002 and learned that it wasn’t going to be until 2018 that the building was 100% occupied, people would be pretty shocked,” Kyle says.

“I like to think back to how the building started and how far we’ve come in terms of the amenities,” Marilyn Day says. “It has evolved into this fabulous, full-service facility that always was great, but it just has gotten better.”

The Clare does have a foundation of high-quality services, resident satisfaction and consistent occupancy. But what people want from retirement communities is always going to shift, and The Clare is up for the task.

“What will hopefully always be part of our culture and our DNA is constant change, constant evaluation and constant feedback from the residents to ensure that we’re always moving in the right direction,” Kyle says.

For now, it’s time to celebrate the tremendous evolution The Clare has experienced over the past 10 years.

“The way The Clare has grown in these 10 years is a testament to the partnership of staff, ownership and residents,” Denise says.