Climate of Chicago, Illinois: Every Season is Different and Why.
Download A Free
Senior Living Brochure

Let’s clear one thing up.

“The Windy City” moniker has nothing to do with Chicago’s climate. It refers to Chicago politicians of the 1800s who relentlessly promoted their city to East Coast investors—to many, they were full of hot air.

Some believe the exact moment comes from an editorial by Charles A. Dana in the New York Sun, which advised against allowing Chicago and the “nonsensical claims of that windy city” to host the 1893 World’s Columbian Exposition.

But while Dana’s repeated tirades may have popularized the name, independent historians have found references predating him. (Nor has Dana’s original quote ever been located in print.)

The earliest, from a Cincinnati paper on May 8, 1876, takes a jab at its Midwest rival with a headline of “That Windy City.” While the article covered a recent tornado, it noted wryly that damage was limited because the city’s buildings “were so heavily weighed down with mortgages that no whirlwind could affect them.”

How Windy is Chicago? 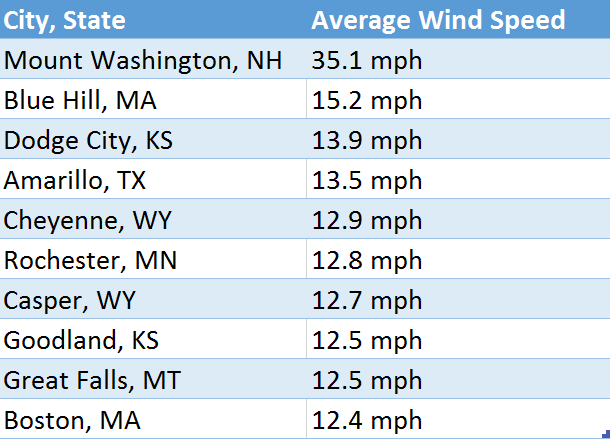 Mount Washington, New Hampshire, is actually the windiest city based on average wind speed, according to the National Oceanic and Atmospheric Administration. (Mount Washington is also the coldest, cloudiest, wettest, and snowiest.)

Chicago, with an average wind speed of 9.8 miles per hour, does not make it into the top ten U.S. cities.

The Climate of Chicago 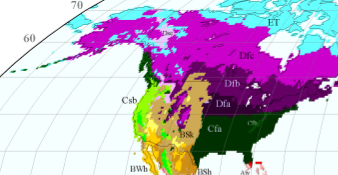 A humid continental climate “exhibits large seasonal temperature contrasts with hot summers and cold winters. It is found between 30° and 60° N in central and eastern North America and Asia in the major zone of conflict between polar and tropical air masses,” according to Encyclopedia Britannica.

The humid continental climate is on a cool but moderate part of the Koppen spectrum:

Based on latitude, Chicago is most closely related to Rome, Italy; Providence, Rhode Island; and Shenyang, China.

Lake Michigan’s influence, as well as that of the urban environment, have lesser effects compared to latitude, which determines the amount of sunlight received, and prevailing weather systems. 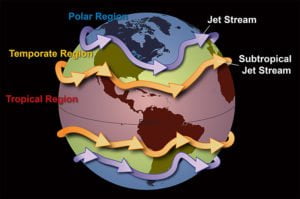 The polar jet stream—a significant weather pattern—is located on or just above Illinois in fall, winter, and spring.

This makes for dynamic weather, as high-pressure and low-pressure systems continually interact.

As an urban center, Chicago enjoys the “urban heat island effect,” which usually keeps the city about 2 degrees warmer than the surrounding countryside. It also makes the city prone to flooding as there are fewer opportunities for water runoff.

Here’s more about the climate of Chicago in each season:

Lake Michigan remains cold through much of the spring. Thus, the air that blows off the lake remains cold. That makes a trip to the shoreline ill-advised in March or April, even when temperatures have started to warm just a few miles inland.

The contrast between the cold air over the lake and the warmer air inland makes for plenty of springtime precipitation, too. The higher the contrast in temperature, the more likely it is for a storm to develop. (The true severity of a hurricane, in fact, is measured by the lowest recorded barometric pressure, not wind speeds.)

Cold air blowing in from the lake causes warm, moist air to rise quickly and form into clouds. If those clouds become sufficiently dense, the moisture returns to the ground as precipitation.

Weather patterns result from the uneven heating of the earth. Cooler air is denser than warmer air, leading cooler air to fill less-dense pockets of warmer air and creating wind. This relationship defines a Chicago summer.

A cool breeze blows regularly, as moderate lake air flows into the warmer, less dense city air. Hotter summers also evaporate more water from the surface of Lake Michigan, increasing humidity. The effect is not so great as to cause precipitation. In fact, Lake Michigan actually limits precipitation during the summer.

For many Chicagoans, fall is the favorite season. Warmth from the summer lingers, creating mild temperatures throughout. Among all four seasons, weather patterns are their least dynamic during these months. While the potential for showers remains, storms are less common.

Lake Michigan, a cooling force in spring, keeps shoreline temperatures warmer into the fall. (The lake cools more slowly than inland areas.) Combined with the urban island heat effect, this can make downtown slightly warmer than the suburbs.

Lake-effect snow occurs when winds from the north or northeaster pick up moisture as they pass over Lake Michigan. Because water temperatures change more slowly than those on land, the lake is warmer than the air blowing over it in winter, allowing storm systems to gather moisture and energy as they pass over.

Still, annual snowfall is only about 37 inches. (Compare that snow capitals of the United States like Marquette, Michigan, with 144.1 inches, or Syracuse, New York, with 118.) About three-quarters of all snow falls during the winter months, with March picking up most of the remainder.

Living in the Chicago Climate 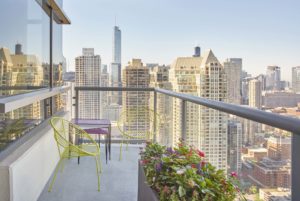 Chicago has four distinct seasons, a climatic commonality with cities at similar latitudes. But it also experiences fewer extreme highs and lows due to the moderating influence of Lake Michigan.

Though fall may be a favorite season, each seasonal change holds its own opportunities.

Cooler weather offers the chance to curl up with a good book or enjoy a comforting meal with friends, and warmer months provide ample opportunity to bask in the sun on a shoreline bike ride or from a rooftop bar.

Just as big cities have endless entertainment options, a moderate climate affords the same diverse choices. Right as you start to tire of sun or snow, the leaves will begin to turn, or the first green shoots will push through the ground.