With over 300 bird species sighted in the past 30 years, Chicago is one of the best cities to watch migratory birds in the United States. More than 200 bird species migrate through Chicago because of the city’s location on Lake Michigan. Among these are many rare birds, including the Brant, Palm Warbler, Gray Kingbird, and White-Winged Dove. In 1995 the City of Chicago began initiatives to prevent bird death and help preserve their habitats throughout the city. These efforts have made Chicago one the nation’s most bird-friendly cities.

Below are the top 10 places to go bird watching in Chicago. 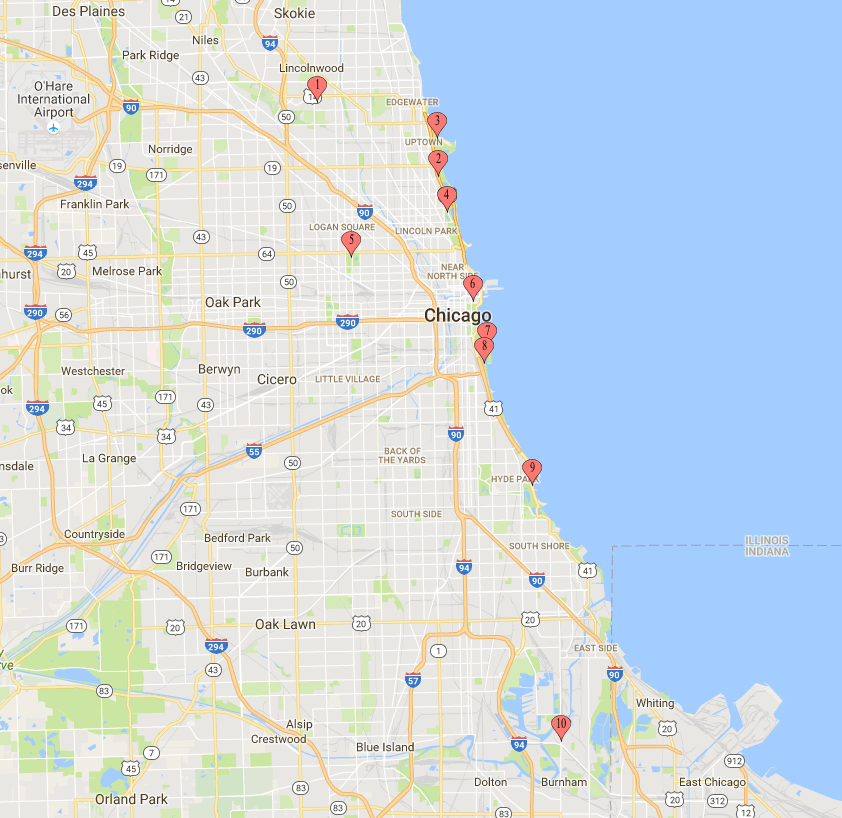 Forest at North Park Village Center/picture from City of Chicago

This educational nature preserve is made up of 46 acres of woodland, wetland, and grassland on the 155-acre North Park Village campus. Originally a tuberculosis sanitarium, the rest of the North Park Village campus now hosts senior housing, government buildings, and a gymnasium. During the migratory season, the Chicago Audubon Society offers guided nature hikes on the trails to see a variety of birds—especially Cooper’s Hawks.

This 1,208-acre park lines 7 miles of shoreline along Lake Michigan. Three of Chicago’s most popular locations for birding are within this park.

The Bill Jarvis Sanctuary is a 7.8-acre woodland, wetland, and savanna built atop an old landfill. Originally opened in the 1920s, this sanctuary is unique because the center portion is completely fenced off from human access. Paths and a viewing platform surround the fenced woodland, where most birds reside.

Montrose Point is known for its “magic hedge,” where a stretch of small bushes host songbirds and a variety of rare birds. Over 300 species have been sighted here, including plenty of Canada Geese, Ring-billed Gulls, and Greater Yellowlegs. It boasts a wide variety of terrains within 15 acres—wildflower grassland, woodland, and shrubs.

Overlook of North Pond Sanctuary/picture from City of Chicago

In 1881 the North Pond 12-acre nature sanctuary was created on top of a landfill. Today, it attracts over 220 land and waterbirds during migration seasons—including many Cooper’s Hawks. The Lincoln Park Conservancy is currently renovating the area to include a new creek and features to provide cleaner water for the pond. If you’re new to birding, try one of the walks put on by the Chicago Ornithological Society each year.

Created in 1871, this 219-acre inland park has open water, marsh, and grassland with brush and wildflowers. The creek that runs through the park was originally designed by Jens Jensen in 1904 and was renovated in 2004 to run on solar and wind power. Around 175 bird species have been sighted here, many which are listed in this 2009 guide, written by a local resident.

During migration, Grant Park is an excellent area for a quick birding trip. Its proximity to downtown and manicured lawns make it easy to see plenty of wildlife during the lunch hour. Many sparrows and thrushes visit during migration. For warblers sightings, visit the elm grove south of Buckingham Fountain.

A cormorant swims at Northerly Island/picture from City of Chicago

Northerly Island is a 91-acre, man-made island created for the 1933–34 World’s Fair. It was then used as an airfield until 2003, when it was torn down and eventually transformed into a park and nature preserve. The newly renovated park opened in 2015 and hosts over 250 bird species, including many Snowy Owls and a rare Brant.

Paul Douglas Nature Sanctuary is within Jackson Park and boasts 57 acres of grassland, woods, lakefront, and open-water terrain. The park was originally used for the 1893 World’s Fair, and the nature sanctuary was created in 1977. The Wooded Island within the park provides rest for many migratory birds—over 250 different species have been sighted. The Barack Obama Presidential Center will be built next to the sanctuary, promising future park upkeep.

The Lake Calumet area, a short ride from downtown, is home to over 100 species of birds and a resting place for many migrants. Sadly, most of the Lake Calumet area has been inaccessible, except for walks sponsored by the Southeast Environmental Taskforce. The area is now undergoing restoration through the efforts of the Millennium Reserve. As new areas open to the public, visitors will be able to watch the many gulls, eagles, and herons that nest here.