Those who know Dr. Mary Davidson know that she is kind and giving, her neighbors at The Clare may even describe her as quiet. What most do not know about Mary is that she thrives in the chaos of multitasking. In fact, the term multitasking may be an understatement. When asked to describe her career, she states, “I had parallel goals working in academia while continuing activism.”  Mary likely won’t admit to her achievements as she is very modest. Throughout her working life, she has been able to form connections and with seemingly effortless skill, juggle multiple projects. Mary comments, “I need to consistently be in motion. If I found downtime, I found a way to fill it. My career did not just happen because I had a goal…It happened to me because I had great people in my life, parents, mentors, and professional staff, each of whom helped me every step of the way.”

As Mary spoke, it became very evident she differentiated herself because of her ability to recognize the needs of groups on a macro scale, “My theory was always that one should function to enable the client, whether an individual, an organization, a group or a system, become independent and not dependent.”

From being the first Black woman to graduate from the University of San Francisco, to pioneering the placement of children for adoption by single men and supporting interracial adoption in the 1960s, to serving as the liaison between university administration and Black students to prevent conflict regarding their demands for Black Studies Program as a doctoral student in the Florence Heller School at Brandeis University. The previously mentioned achievements are a small fraction of her entire career and while explaining her life, she hardly bats an eye, nor does she accept praise for her accomplishments.

Mary was born in Muskogee, Oklahoma, where her ancestors settled in the late 1890s when it was still a part of the Creek Nation. She was raised in Marin County in Northern California. In discussing her parents, she is very clear that they provided her with support, guidance and confidence in her ability.

Mary attended the University of San Francisco as an undergraduate and studied psychology and sociology. She was pursuing an advanced degree at Saint Louis University and her options were made easier by segregation in St. Louis at the time. She decided to attend the University of California at Berkley to get her master’s in social work. “I shared with my father that I was going to accept admission to the school of social work and my father stared back at me and began crying.” Mary further elaborated on her father’s reaction, recounting his disappointment in Mary after he and her mother had pushed past biases their whole life to provide for her. Despite his concerns, he was proud when he attended her graduation at Berkley in 1964.

Within the first two years of her social work career, Mary quickly realized that direct practice with individual clients was not her path. She found her passion in exploring the systems and policies that may shape and improve everyday life for society’s most vulnerable. Mary felt she could affect change by creating or amending a policy that those practicing at the micro level could implement; this strong belief became the theme throughout her life.

While studying at Berkley in 1963, she followed the coverage of the Birmingham Church Bombing, which awakened her passion for civil rights. In the late 1960s, Mary served as the Coordinator of National Conventions for the Congress of Racial Equality (CORE). She was an organizer and founding member of the National Association for Black Social Workers. During the 1970s and 1980s, she acted as the Principal Investigator and Lead Consultant for the Monitoring Commission for Desegregation Implementation for the Chicago Board of Education for nearly a decade. Additionally, she worked with the U.S. Department of Health and Human Service’s Office for Civil Rights to frame the original guidelines of federal legislation for the civil rights monitoring of national child welfare services.

Her work in activism was coupled with her career in academia. Mary spent her academic career with three major universities, including the University of Chicago, Southern Illinois University in Carbondale, where she was the founding director of the graduate social work program, and Rutgers, the State University of New Jersey, where she served as Professor and Academic Dean for the Graduate School of Social Work serving statewide campuses. Mary intensely focused on encouraging faculty to develop curricula to broaden the scope of student studies and enhance relevant practice in the public sector. She successfully sought funding to support these initiatives, resulting in her national recognition by the U.S. Department of Health and Human Services. 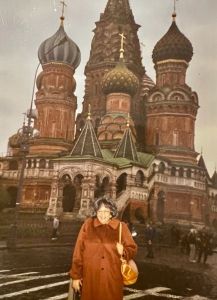 As if her academic responsibilities did not keep her schedule full, she served her profession internationally as the Vice President of the Inter-University Consortium of International Social Development, the Director of the International Elderhostel in Oaxaca, Mexico for eight years where she was recognized as a Distinguished Visitor for her service with children and families in the City of Oaxaca,  and has presented on the Welfare Research Centre of the School of Social Welfare and Race Relations in Sweden. Additionally, in the early 1990s, by invitation of the Ministry of Foreign Affairs, she consulted on the development of the first Russian School of Social Work at Moscow Business University.

When asked to reflect on the high points in her career, she mentions she is particularly proud of pioneering the adoption of children by single men in San Francisco and steadfastly supporting interracial adoptions from its earliest days.

In her retirement, she has continued to affect change. While reading an article in the WSJ, she read about a non-surgical treatment used by the Ponseti Institute for children born with club feet. Mary was born with one club foot and seeking involvement to expand treatment options to underprivileged nations was something she felt compelled to help with. When Mary asked where the need was greatest, Cameroon was named as a nation in need. Mary’s donation in 2012 supported the travel expenses for a physician to train at the University of Iowa at The Ponseti Institute with the idea that the physician would return home and share his training with others. By 2020, the Cameroon Government officially adopted the treatment. Mary’s donation set in motion a program that resulted in over 1,400 children born with club feet being treated in Cameroon since 2014.

After she retired from Rutgers, Mary decided to move close to one of her children. Her daughter resides in the suburbs of Chicago, while her son lives in Washington State. As you might have guessed, Mary moved to Chicago and lived in the Streeterville neighborhood before moving to The Clare in 2017.

One of the most refreshing qualities observed while talking with Mary is her modesty. Her passion and drive affected change in the lives of many in countless ways and anyone that she has interacted with would agree without reservation. Since moving to The Clare, she has continued giving what she can of herself when a cause calls out.